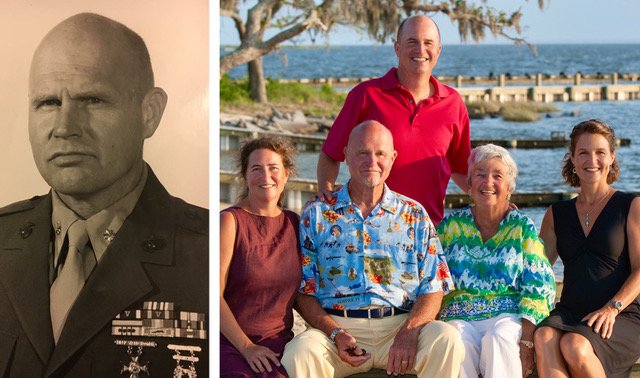 Share this Tribute:
Share Obituary:
Share Your Memory of
LtCol. USMC Ret. Kenneth
Upload Your Memory View All Memories
Be the first to upload a memory!

How do you summarize the life of a truly remarkable husband, father, Marine, and devoted volunteer? My father, LtCol. USMC Ret. Kenneth Donald Johnson, was so many things: intrepid, intelligent, creative, mischievous, silly, resourceful, strong, and sooo full of love and joy! I asked him after he retired what the Marine Corps motto, Semper Fidelis, meant. He laughed and joked, “I got mine!” Kidding aside, Semper Fidelis - always faithful - is the perfect description for a man who always stayed true to his family and his principles. He met Mary Ann Johnson, USN RN, his wife and best friend of 56 years, while running on Virginia Beach in 1963. He was 25 years old, bald, sweaty and wearing combat boots with knee socks (not much changed over the years). She went out with his friend at first, but he eventually won her over. She said, “He listened to me instead of talking about himself all night like most of the guys I met. Well, after decades of loving him, now it’s hard to get him to stop talking!”

His most oft spoken motto was, “Where there’s a will, there’s a way.” Like him, he expected us to give 100% no matter what we did. Because to waste your potential is to take your God-given blessings for granted. I can hear him now, saying, “Lady, you can do anything you put your mind to!” He was not afraid to take the hard path and he approached difficult tasks as a welcome challenge. He’d work hard all week as a Marine Corps officer, and then get up at 4:30 AM on Saturday to take his kids to a swim meet where he and Mom would volunteer all weekend. And then right back to work on Monday. There were scars on his hand from calmly carrying a flaming cast iron pan of oil from the kitchen stove to the yard in order to protect his young family from a kitchen fire. He never complained. He always felt extremely blessed for surviving three tours in Vietnam without a scratch. The fate of his friends and allies in South Vietnam weighed heavy on him for the rest of his life. He wouldn’t talk much about his experience there, but did tell the story of a live rocket that went clean through the airplane he was flying in, passing directly between him and an Army Colonel. While his peers overseas were out on liberty, he’d stay behind to record messages onto reel-to-reel tapes to send home to us. Mom played them in the stereo system he built as we looked around for him in wonder. He led by example. Later in his career as a battalion commander in Okinawa, when his soldiers went on 20-mile hikes in searing heat, he marched every step with them. One of his proudest career accomplishments was that he didn’t lose a single Marine during his command.

After leaving “the rat race,” he adapted quickly to retirement on the Outer Banks of NC with a black lab, truck, garden and boat. He turned a backyard sandbox into an ever-expanding garden with rich, dark soil by composting food scraps into the garden with a post-hole digger every day. The sweetest, warmest, most delicious peaches I’ve ever had were from the tree under which Dad buried his beloved black lab, Ashes. HPGOF (hot pepper, garlic, onion, fig jelly) was one of Dad’s specialties and he delighted in sharing jars of it - complete with labels he typed himself, “With Heat We Eat!” He was a dedicated community volunteer who gave countless hours to many organizations, including the Wright Brothers National Memorial, Dare Community Crime Line and The Coast Guard Auxiliary. He drove my elementary school bus for a year because I volunteered him when I was bullied and scared. Not to be deterred from his dream of golfing in retirement, he drove that bus five days a week and then walked a mile to and from the nearby golf course to play 18 holes each day (carrying his clubs). This began years of involvement in the local schools in many different roles. He helped a lot of kids. Years later, I saw some of those same grown kids approach him in the grocery store, thanking him for caring enough to put up with them and help them find direction.

Dad had the confidence and humility to learn from others or teach himself anything. He learned to fly solo while still in high school under the tutelage of stunt pilot Pete Meyers (whose airplane is in the museum at Oshkosh). He was a talented woodworker - skills he learned from his Swedish father and master carpenter, Axel, who emigrated from Sweden to the South side of Chicago. His creations were functional, creative and sometimes humorous; whether it was furniture, automotive, or electronic. Who saws a hole in the roof of a perfectly good car in order to install a sun roof? He did. Twice. In his later years he focused on building new and entertaining obstacles to keep the squirrels out of the bird feeders that he and mom so loved. He delighted in the ingenuity and acrobatics of the squirrels. He’d watch the show with glee! Eventually, he resorted to shooting water guns at the squirrels from his porch swing. I can hear him giggle now.

I really got to know my Dad after he retired. He supported my effort to make money as a kid by mowing lawns even though he had to maintain the mower, get the gas, and schlep me and it to and from each job. Eventually he took over the business (mostly for exercise) and donated his services to the church and local widows who could use the help. We spent three years of my high school driving to and from school together - ½ hour each way. He said during one of our many discussions about the meaning of life and religion, “Lady, I’ve met a lot of good people all over the world and they’re not going to Hell.” He held Mom’s hand in church on Sundays, mowed the church lawn and brought roses from his garden for the altar. (He gave himself permission to pee outside when he learned that human urine was a good fertilizer for roses). He carried a picture of Jesus in his wallet, but felt it necessary to let the Reverend know that he didn’t believe Jesus was the only way to get to Heaven.

Music brought him endless joy. I can picture him blissed out on the living room floor with headphones on listening to his Peter Paul and Mary or Kingston Trio records. He gave me a stereo he had built when I was only 10 years old, with 16-amp speakers – a wall of sound!  He installed the best stereo I could have ever hoped for in my first car – the one he put the sunroof in. After he installed it, we drove around Colington Harbor joyfully listening to the heavy bass beat of a Peter Gabriel song. The music player he had when he died was filled with his most favorite songs, and it never, ever skipped. But on that particular day, it got stuck on Peter Paul and Mary’s, “Hang down your head, Tom Dooley… oh boy you’re gonna die.” He loooved that song. I think he got a chuckle out of it. A last prank. My sister, Lauren, and Mom were with him at the end. He knew he was absolutely loved and he passed peacefully.

I picture him on the back-porch swing with Mom, gap-toothed smile and scotch in his hand.

Watching the sunset reflect on the water, the ospreys soar and ducklings waddle up from the canal on the dog ladder that he built. We planted a fig tree in your honor today, Dad. We will love you forever. Your love, humor, and determination will live on in us.