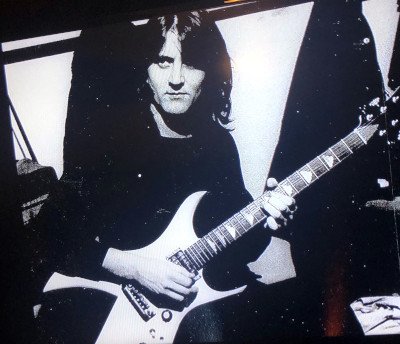 The world lost one of its shining stars with the passing of Paul W. Chapman on June 9, 2020. Master musician, songwriter, storyteller, chef, mentor, teacher, friend-Lightning in a bottle! All that and so much more, comprised the force of nature that was Paul Chapman.

Born in Cardiff, Wales on June 9, 1954, Paul was an exceptionally proud and spirited Welshman to the core.  Somehow, he was able to maintain a delicate balance between laser focus and reckless abandonment!  Thus earning the affectionate nickname “Tonka“, in deference to his indestructible nature. He was a hard man to keep up with, even for the most wild-hearted companions.

Paul’s ever-present family values were a result of being raised in a tight-knit family environment by his mother, Jean, whom Paul adored, and his cherished father, Bill.  With their father's guidance, who was an accomplished mandolin and guitar player himself, Paul and his sister Cathy, excelled as musicians at an early age.

Music was a constant in the Chapman household.  Jam sessions and rehearsals were commonplace amongst family, bandmates and friends, which at times included Paul's revered cousin Dave Edmunds. Their doors were always open, often playing host to the various cast of characters involved in Paul & Cathy's musical ventures.

By his teens, Paul was touring with bands in England and Europe.  At the age of 16, Paul found himself in an impromptu jam session in a dressing room with another slightly older, teenage guitar wunderkind, guitarist Gary Moore of the Irish band Skid Row.  A short time later, Gary recommended Paul as his replacement when he departed from the band. Paul managed to learn their complex set list within three days, in time for his first performance.  With that opportunity, Paul made his first step into the big leagues and never looked back.

During his time with Skid Row, Paul caught the attention of members of the rapidly ascending, London based band, UFO, who later approached Paul to join and play alongside guitarist Michael Schenker.  They hit the road together with a lethal twin guitar team, recordings of their performances from that era still remain an extremely sought after and popular item for both UFO fans and guitar enthusiasts alike.

Following his tenure with Skid Row, Paul joined up with a very talented group of musicians to form the band Lonestar.  This was Paul’s ideal vision of a band; live together, write & rehearse together and create all manner of mischief together. Paul remained immensely proud of this band for the rest of his years. Lonestar signed with CBS and recorded two albums, one of them produced by the one and only Roy Thomas Baker of Queen/Bohemian Rhapsody fame.

After Lonestar's first shows in Holland, Paul returned home with a girl named Linda. They would soon be married and before long, they became the proud parents of Paul's first son, Thys.

Later on during the Lonestar years, Paul was recruited to fill in on lead guitar for an American tour with UFO.  Soon after, Paul was chosen for the full-time lead guitar position.  Paul’s career with UFO flourished in the following years, recording four studio albums on Chrysalis records.  Their “No Place To Run“ album was produced by none other than Beatles producer, George Martin, with whom Paul enjoyed discussing the finer points of production, right down to delay time mathematics. Through this prolific period, UFO performed on several international tours and enjoyed success in the USA including frequent airplay on MTV.

On a break from a UFO-AC/DC tour, by chance, Paul landed in Satellite Beach, Florida on a layover with an AC/DC crewmember.  Paul was taken by the Florida Sunshine and beaches, and shortly thereafter, by a woman named Cheryl.

Before long, Paul and Cheryl were married and soon would welcome their son Sean into the world, bursting with energy much like Paul.  A short time later their only daughter Brittany was born, who will always be daddy's little girl.  Along with Thys and Cheryl's endeared son, Bobby, the Chapman family was complete.  Paul reveled in the family environment he so much enjoyed.

Following the split of UFO, Paul regrouped in Florida and formed a band called Madman, writing & recording and ultimately leading to some lifelong friendships and a pathway for future Waysted members. That band's time was cut short by an offer Paul received to join his old partner in crime, former UFO bassist Pete Way, in his new band, Waysted. With that, Paul moved the family to England while Waysted established themselves as a rising force, with several top-notch releases and continued touring.

Paul returned to Florida in 1987 after Waysted split up, on the heels of a high-profile U.S. & Canadian tour supporting Iron Maiden.  After a short breather and some family time, Paul set out on his next musical venture, determined to build a band from the ground up, in similar fashion to Lonestar. That resulted in the band Circus Circus, which went on to record at Paul's old stomping grounds, Rockfield Studios in Monmouth, Wales. Circus Circus evolved into Ghost, upgraded with the addition of two fellow Welshmen and eventually released an album as Paul Chapman’s Ghost.

During that time, Paul also began teaching guitar and bass, quickly developing a roster of faithful students.  Paul's teaching career led to the creation and release of the Paul Chapman Guitar College video and tape series.  His approach was a breath of fresh air for aspiring guitarists, through his concise methods and play along approach, including his pro-quality music tracks. Through talent, intelligence and his natural ability to connect with people, Paul became an extremely accomplished teacher. He fed on advancing his musical knowledge, delving deep into theory, and its application to guitar technique. His teaching evolved to the highest levels with his understanding of modal theory and his ability to convey that knowledge and convert it into technique.

While teaching at Florida Discount Music, Paul met a kindred spirit in Terry, who would eventually become his wife. With their shared experience and love of guitars, they opened a guitar shop called Total Guitars, which became Paul’s home base for teaching. Another highlight of this period for Paul was jamming with his son Thys, who had become a top-notch drummer.

As the new millennium drew near, while attending his former bass player's wedding, Paul met the mother of the bride and both experienced an immediate connection. Debby and Paul would soon become inseparable, marrying in 2001. They hosted a legendary music-filled wedding party where Paul was joined on stage by his close friend and fellow mad-Welshman, Badfinger drummer Mike Gibbins.

Their home became their sanctuary, hosting countless family gatherings, often joined by their expansive brood of nine grandsons and two granddaughters of whom Paul & Debby were always immensely proud. There would always be lots of music, including Debby’s amazing flute performances. Paul was a masterful host, cooking his amazing specialties - more often than not, featuring his signature curry dishes.

They also enjoyed traveling together on their many trips to England and Wales and various tropical getaways not far from home. During those years, Paul was excited to write and record with a re-formed Waysted, and to join forces with many original Molly Hatchet members in the band Gator Country. Some of them were old friends from his UFO days and he was thrilled to be on stage on a regular basis again. He later joined forces with the Swedish band, Killer Bee, enjoying the camaraderie while on their various tours.

Paul lost his beloved Debby in December 2018. As difficult as it was, he forged ahead as he had always done and continued teaching guitar and was planning future musical ventures right up until his passing.  Paul’s legacy will live on through his music and in the hearts and minds of the countless people whose lives he touched, and those who were fortunate enough to be his family and friends.

To send flowers to the family or plant a tree in memory of Paul Chapman, please visit Tribute Store

Share Your Memory of
Paul
Upload Your Memory View All Memories
Be the first to upload a memory!
Share A Memory
Send Flowers
Plant a Tree