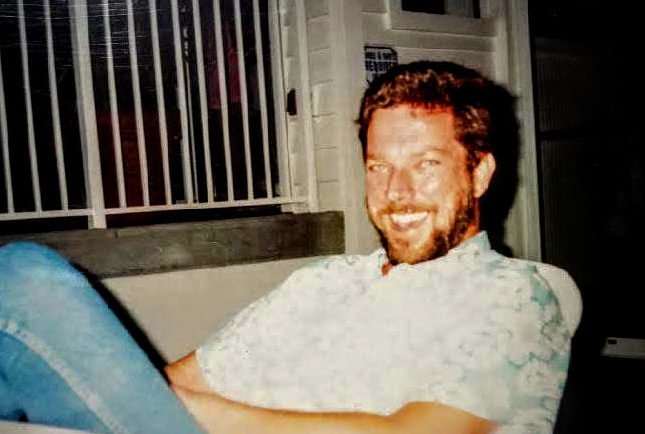 With sad and heavy hearts, we say goodbye to our beloved brother and son, Steve Holloway. Steve passed away April 13th, 2020 in the care of Hospice House, Melbourne Florida.

Stephen H. Price was born November 17th, 1953 in Harlingen, Texas to William and Martha Price. Bill and Marty also had a daughter Sheila, Steve’s younger sister. After the passing of Steve’s father, Marty married Gene Holloway of Houston, Texas. In 1960, Steve and his sister were legally adopted by Gene, an engineer at NASA. Steve soon welcomed into his life three more sisters: Sonya, Sarah, and Amy Holloway. In 1967, when Steve was 14, his family moved to Cocoa Beach, Florida, where he graduated from Cocoa Beach High School in 1972.

Steve quickly took to beach life and it suited him well. He decked out his VW van and was always seeking the best waves up and down the east coast with his hitchhiking dog Tucker enjoying the ride. As a young man, Steve was a Bohemian and a self made businessman. Steve discovered his passion for the surfboard industry after landing his first job working for Bill Feinberg at Oceanside Surf Shop in the early 70’s. There, Steve met his good friend Bill Eberwein while they repaired surfboards.

This friendship would turn out to be the launch pad for Steve and Bill to partner their skills in 1975 to become one of the top custom surfboard builders and suppliers to Ron Jon’s and other local surf-shops under the name Ron Jon Boards and Lightwave Surfboards. In 1981, after their amazing run building custom boards for local shops, Steve turned his passion for building boards to a focus on his own company, Lightwave Surfboards. Later, Steve opened his own surf-shop – Lightwave Surf Shop in Cocoa Beach, Florida. As a local business owner who believed strongly in the value of community, Steve was a generous supporter and sponsor of the Lightwave / RonJon’s ’81 and ’82 surf team. Throughout his career, Steve was a well-known contributor to the Florida surfboard industry.

Outside of his work life, Steve was an avid fan of drag racing. He had a passion for fast, sexy cars, which showed in his many lovingly refurbished vintage Porsches. His prize car was a sweet Porsche 911 Carrera convertible.

Steve was preceded in death by his biological father, William Thomas Price, his Mother, Martha Price Holloway, and his nephew Michael Bigelow.

An online memorial for Steve has been set up at https://www.forevermissed.com/stephen-h-holloway. Friends and family are invited and encouraged to upload condolences, stories, and photos of Steve. The family would be deeply appreciative of any remembrances and photos left on this site.

A celebration of Steve’s life will be held in Cocoa Beach at a future time and date. Details will be provided on FaceBook and on the above memorial site.

Donations in remembrance of Steve and all the other legendary surfboard builders that made the Florida surfing scene what it is today can be made to Florida Surf Museum at www.floridasurfmuseum.org

To send flowers to the family or plant a tree in memory of Stephen Holloway, please visit Tribute Store