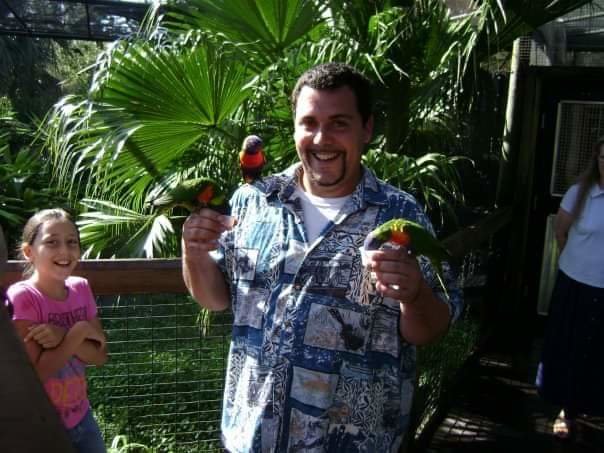 It is with sadness that his family announces that on Wednesday, June 3rd, 2020, Jeremy James DiGeorgio passed away. He was 35.

Those who know him as a friend, know that he loved those he called friends with 100 percent of his heart. He was always there for you with a smile, a laugh and a hug if you needed it. He would listen, love, or even be angry - with all of his being. And talk.

Oh, yes. He could talk for hours about things he loved. Friends, football, family, grilled chicken - anything. He was looking forward to seeing the Tampa Bay Buccaneers this year, with some nobody QB they signed this off-season. We're sure he'll be watching from the big screen in the sky. On a side note, does anyone know how many channels they get up there? Has to be HD, right?

Jeremy often didn't think everything he did through all the way, which led to some interesting times in his formative years:

Like the time as a 2 1/2 year old where he decided he was going to follow his older brother, Adam, to school. On his bike with training wheels. Cops, sheriff's office: plenty tried to help find him. Eventually, he was discovered and returned. No one was hurt, save the snail he ran over. Though there may not have been a snail. I'd challenge you to prove there wasn't.

Or the time he decided he wanted to teach himself to drive while his mother was paying for gas; and with his younger brother and sister (Angela and Anthony) in the car, backed into A1A. Again, no one was hurt. Also, somehow no one called child services. Different times.

We could mention the time he tried to burn down the family's backyard. Or the other times he tried to drive as a child. But, we won't. Or did we just do that? Never a dull moment!

His teen years were... not the most calm? As we said, never a dull moment. Jeremy, again, didn't always think everything through. These years were tough (for all parties involved), but he made some great, lifelong friends during these years. He earned his diploma. He learned a lot about himself, and the world.

He spent the last 10 of years working at Huntington Greens Apartments. He made some great friends there, and took joy in being able to help people. He loved his work there, though he had been let go recently.

Joining him in the place up there in the sky is his ever faithful companion, Jeter. Don't mind the picture, Jeter was never very photogenic.  He loved Jeremy with all his puppy heart, and Jeremy loved him. Jeter would have been 17 human years old in October. Before he passed, Jeremy knew Jeter's time was coming. Less than two days after saying bye to Jeremy, we said our goodbyes to his best friend. We doubt either would have known what to do without the other for very long, such was their friendship.

Jeremy was born to Linda Lea Digeorgio and James (Jim) Joseph Digeorgio. He left behind two brothers and two sisters: Adam, Angela, Anthony and Sarah (don't ask why three As and then the S. Or the J. No one really understands the thought processes), a sister-in-law-but-more-like-a-blood-one-too, in Stacey as well as two nieces and a nephew: Alec, Aubrey and Adalynn (AJ). He was also survived by quite a few distant relatives including aunts and uncles, but one is notable for having helped in raising him, his aunt Melody (the others are all great too, we swear!). She was the first to hold Jeremy, and she loved him dearly.

A time and date for the memorial and celebration of life have not been chosen yet, as we live in weird times where only a few people can be in a room at a time. Check Facebook for updates, like the world does for everything.

We'd like to thank everyone for all the love and prayers.

To send flowers to the family or plant a tree in memory of Jeremy DiGeorgio, please visit Tribute Store